Blog - Latest News
You are here: Home1 / Illuminating Interviews2 / Interview with the director of the LIGHT documentary, Peter-Arthur Str... I am honored to introduce my client and good friend, Peter-Arthur Straubinger, the director of “In the Beginning There Was Light”, or for simplicity’s sake, the Light documentary, a mind expansive film, or as IMDB.com declared, “Mindblowing!” about “breatharianism.”

What is that, exactly? Let me give you a brief synopsis.

Breatharianism or “living on light” deals with human beings who allegedly can survive without food and fluid, over weeks, years and even decades.

As incredible as it may seem, the Light documentary provides certified reports of personal experiences, interviews and scientifically documented laboratory experiments as evidence that there are people living today who do not need food either to live or to sustain their metabolism. They live on “light” alone. Depending on the tradition this “light” may be called PRANA, CHI or ORGON.

Hello Peter!  Thank you for joining us today.  Please share with us what inspired you to make this extensive documentary film about Breatharianism?”

Actually, “In the Beginning, There Was Light” is about breatharianism only on the surface, as a kind of dramatic arc for telling about a deeper truth behind our visible reality – the “light of life”.  So, what it is truly about is the investigation and questioning of this materialistic worldview, which rules our society – that it’s only real if you can prove it, touch it, measure it. 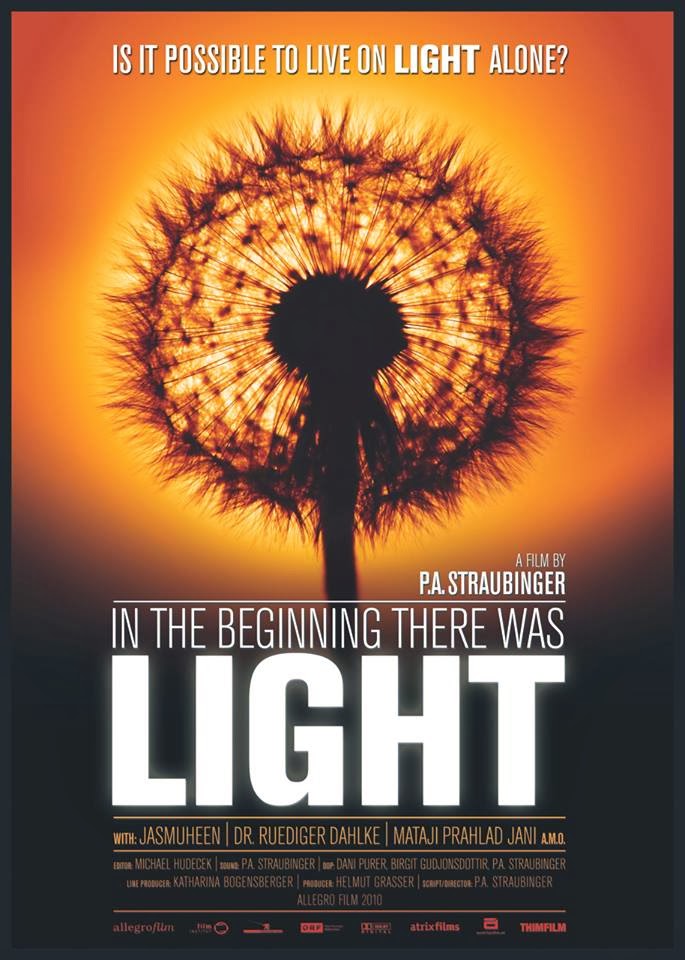 I could have made this film with the same message about telepathy, faith healing, remote viewing or the wonder of life itself…

The reason why breatharianism became my chosen golden thread and message was due to a visit with a meditation teacher who I was told lived only on water and ‘light’.

I got to know him quite well, and he told me that he had not eaten for over a year, that he only drank water. I’d heard stories about this phenomenon before but did not really believe it. But meeting a person face to face had a much stronger impact!

He sounded very credible, but I asked myself, if this phenomenon really exists, why isn’t it taken seriously by scientific institutions? Why aren’t dozens of universities doing research on this?”

Now that is an excellent question! How much is going on that is NOT being studied due to scientists and others stating, matter-of-factly, “That’s impossible”!

“Yes, exactly! So this tension was the reason why I’ve been doing my own research for nearly five years. Through this, I discovered a lot of good arguments by classical medicine as to why this should not work, how people starve every day and others died trying to live as breatharians.

However, there are many records about this phenomenon in all cultures, throughout all times, and of course my Austrian friend who was living and breathing proof (pun intended ;).

I decided to seek first-hand information about this fascinating phenomenon and started my five-year journey, travelling around the world to China, India, Russia, the U.S., and many other countries. And I discovered some incredible knowledge, from ancient Eastern wisdom to the findings of modern physics…”

Please share with us how the showing of the Light documentary in at the Cinema Noesis Film Festival inspired you to take the time & investment to bring this controversial movie to the United States, with English narration?

When I participated in the Cinema Noesis Film Festival, organized by the Institute of Noetic Sciences, I was completely overwhelmed by the reactions of the crowd there. The people loved the film and asked why it was not available in the states….

That was my inspiration!  And I am proud to say that it is now available to rent or own, or you can just check out the trailer through Vimeo streaming.

Although the Light documentary was a big Box Office hit in cinemas through out Europe, especially in the German speaking countries, the U.S. distributor did not do any significant promotions, so almost no one knew about the film here.

Due to the reactions of the audience at the film festival, including yours, Wendy, I was definitely motivated to produce a new version of the film with English narration and some minor changes to bring it up to date.  And here we are today!

By the way, the English narration is spoken by me.  Though my English has an Austrian accent, many people gave me the advice to stick with my voice, like how it is in the original German version. This works out well because “Light” is actually my journey around the world, finding the truth behind breatharianism. Therefore, the text is written in the first person, and it just made sense that it is spoken by me ~ perhaps, it adds even more authenticity….

Yes, Peter, I believe I was one of your supporters to translate the film in your own voice, and yes, it most definitely adds to the authenticity!  So, what are your plans to spread the Light in the U.S. market?

Well, since I do not have the money for a big promotional campaign, I hope the word of mouth will help to spread the message of the film, which is, by the way, not to promote breatharianism but to open up minds for the possibilities of such.

As I mentioned earlier, “Light” is now available via Vimeo on demand, which can be easily spread via social media.  We also have an affiliate program through Distrify, where an Opinion Leader or a Group can offer the film to their supporters and receive 25% of the income.  Not bad for spreading the Light, huh?!  😉

Wow, Peter, this affiliate offering is truly a wonderful opportunity for the Light documentary and really, for any independent film, don’t you think?

Yes!  In my opinion, Distrify is a wonderful new instrument for sharing a film through social media, as well as a way to give back to the people who put so much work and love in their blogs and Facebook pages.

Since indie films like these are produced with deep passion to share deep messages, my follow-up question to Peter was, “How does the theme of your film affect your real life?”

I understood that mainstream science and the teachings I learned in school about nature are only a part of truth. They derive only from (materialistic) belief systems and it is necessary to question them because what made sense a few hundred years ago is now destroying our world and is a burden to creating an open, loving, and cooperative society….”

UPDATE: Peter, share with our readers what exciting happenings and milestones has happened for you and the Light film since we first interviewed together?

I am very happy that we could finally publish a DVD for the english speaking and found a few enthusiastic viewers with it. Last summer, I also made a promotional tour through California where I could give a talk in front of a wonderful crowd at the Pranic Festival in San Francisco. We just launched a new website and lightdocumentary blog. The next project will be a fully dubbed version and so I hope even more people will find their way to the “Light”.

Thank you so much for your time,  your work and your incredible dedication here.  And thank you for your very valid point that we all should take to heart: time to open our minds, to open our hearts, to go beyond what is dished out to us as “the truth.” Interview with Dean Radin, Chief Scientist at the INSTITUTE OF NOETIC SCIENCES (IONS) The Yin-Yang of Receiving-Giving, as real as gravity!

The Serendipitous Summer of ’13